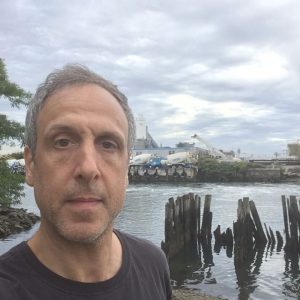 I am an artist working on paper in water-based media, primarily watercolor, gouache, acrylic, and pen and ink. I paint landscapes, rendered while traveling, and in recent years I have moved my work into the studio to expand these landscapes on a larger scale.

When I was young a  number of inspiring influences pushed me towards art; Thomas Eakins’ paintings at the Museum of Fine Arts in Boston, Mad Magazine, Terry Gilliam’s animations, R. Crumb’s cartoons, and most importantly, my teachers. I particularly thank my art teacher at the public schools in Lincoln Massachusetts, Robert Treanor. When another teacher awarded me a commendation for “excellence in English class,” he insisted my award be a book of M.C. Escher’s prints. The images in that book really set me on my path.

At Rice University in Houston, Texas, I studied painting with Bas Poulos and printmaking with Karin Broker. Bas showed me how to merge painting with travel, to look for the unexpected, and to unite painting and drawing. He also brought many artists to my attention. Karin helped me hone my skills me as a printer and pushed me technically, establishing a foundation in process which has helped me excel in all areas of graphic design.

I moved to New York City in 1988, working first in the SoHo as a silkscreen printer for Rupert Smith, Andy Warhol’s printer. I editioned prints for Kenny Scharf, Michael Heizer, and Keith Haring, including one of his last editions, a collaboration with William S. Burroughs. I moved to Brooklyn when it was still a cheap destination for artists and found a community of friends in the arts and music.

An early job in interactive medical graphics, then exposure to Photoshop 1.0 lead to a career in graphic design. My experience includes editorial illustration for newspapers, cartoon illustration and animation for children’s media, and extensive work in print and motion graphics for national magazines. That work can be found at kitses.com.

I continue to paint landscapes, exploring the spaces where nature meets development at roadways, highway overpasses and urban waterways. What first attracted me to these spaces was their incredible space, light and form. Increasingly my focus has been on the overlooked or hidden legacy of environmental damage that humans have brought to the world.

I live in Jackson Heights, Queens, with my family, and work in promotions for magazine publishing. Painting and drawing occupy most of my free time, and when I’m not making political cartoons I can often be seen bicycling around to paint the urban landscape.